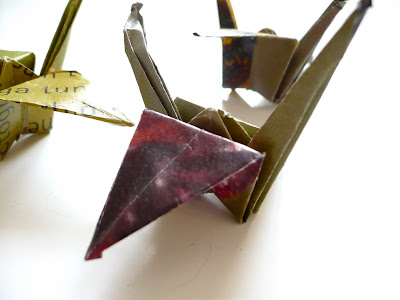 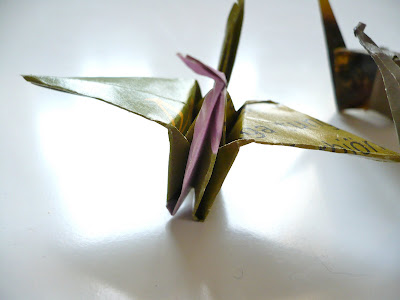 I've read somewhere that In Asia, it is said that folding 1000 paper origami cranes makes a person's wish come true. On Wikipedia it says: An ancient Japanese legend promises that anyone who folds a thousand origami cranes will be granted a wish by a crane, such as long life or recovery from illness or injury. The crane in Japan is one of the mystical or holy creatures (others include the dragon and the tortoise), and is said to live for a thousand years. I'm not sure if I want to fold 1000 of them and I think I've only folded around 20 but maybe I can do 100? I'm thinking maybe of making those paper crane mobiles you hang from the ceiling, I gotta do something with them.

Email ThisBlogThis!Share to TwitterShare to FacebookShare to Pinterest
Etiketter: Inspiration, Other creative

That would be fun:)

This just made me think of how romantic it would be to go into a room with 1000 paper cranes all made for me by a boy!

^ the romantic is me slipping out there :D

So true! That would be romantic. What a lovely idea:)

Carolina Grönholm
Hi I'm Carolina! I draw and animate. Feel free to get in touch!